"... I also realized (in the dream) that the universe was not infinite, but, was like a round area bordered by a ring of space which was a different dimension bordered by other dimensions. (?) The Saturn-shape comes to mind.

Also, there are other universes next to this one... as there are other galaxies and solar systems. The pattern of eternity (this universe arrangement) would look like a field w/ all these Saturn-shapes polka-dotting it."

- quote (recounting an actual dream) from a 1975 personal journal, via an excerpt from: "Temp L (The Temple Drawings)" - unpublished project record -1982, Dia Sobin

"Many modern theories of fundamental physics predict that our universe is contained inside a bubble. In addition to our bubble, this `multiverse' will contain others, each of which can be thought of as containing a universe. In the other 'pocket universes' the fundamental constants, and even the basic laws of nature, might be different.

Stephen Feeney, a PhD student at UCL who created the powerful computer algorithm to search for the tell-tale signatures of collisions between "bubble universes," and co-author of the research papers, said: "The work represents an opportunity to test a theory that is truly mind-blowing: that we exist within a vast multiverse, where other universes are constantly popping into existence."

Everybody dreams, and dreams come in a variety of flavors: mundane, romantic, other-worldly, prescient, wish-fulfilling, historical, etc.  The truly transpersonal "cosmic" dreams are rare, but, when you have one, you tend to want to share it. It took me over 30 years to "share" this one of mine... and then, only because it inspired an image, "A Cosmic Nest" (above).


The theory it alludes to - but, one I was certainly not aware of in 1975 - is that of the "multiverse". Apparently, there are more than one of these theories... and one disparity lies in whether or not the theoretical universes "resemble" flat disks or spherical bubbles. Ah, but, it seems my unconscious mind worked out a compromising alternative - a Saturn-shape!  (Now, where's a Hotline for Cosmological Dream Revelations when you need one?!) ;-)

Okay, but, I'm not really poking fun at my unconscious mind... in reality, I have the utmost respect for it. And, my advice is, if you ever want to have similar sorts of dreams, or, creative dreams in general, you develop a healthy admiration for your unconscious. Kiss it good night before you fall asleep. Remember, it can go where Corporeal You cannot.

BTW, whilst I was scratching out my multiverse on a computer image file, physicists were creating theirs in the lab... oh my! 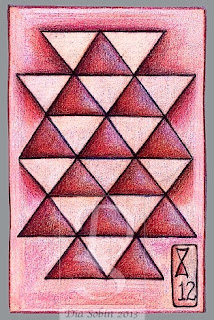 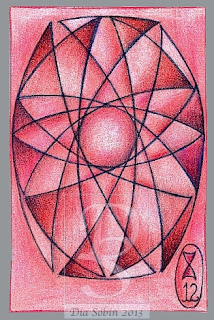 I've noted recently that the one post I expected to be virtually ignored, is one that has mysteriously gained an audience in the past few months. That is, Quantum Esoterica: MetaStructures.

If you Google the word "metastructures" you'll find all sorts of unrelated meanings and organizations. When I registered a copyright for a deck of cards named "MetaStructures" in the 80's, I was unaware that it was even a word. Now, it is. Which, from my point of view, is unfortunate, as its current "meaning" has no metaphysical reference whatsoever. In fact, I am no longer going to apply the word as the title for this body of work in future posts.

Meanwhile, I was moved to go into my black vault files recently, where I found the reference to the dream, and was inspired to illustrate it... except, as it happened, the Saturn-shapes wound up inside bubbles. The formation was a familiar one; it was a "metastructural" image after all. I can't seem to avoid them. It is, in fact, an aggregate or process figure for Unit One, #16!

In the event there's anyone out there who is genuinely interested in my metastructural musings, however, here's another one: In the original series of images, each Unit progressed to number 12... that is, there's 12 process figures and 12 radiant or dynamic figures for each of the four Units. At the time, the number 13 was itching at the back of my brain, like some annoying skin irritation, but, I simply could find no reason to carry the sequence to 13. Theoretically, the radiant representation of the the #12 already fulfills the expression of #13 with it's central, "silent" point. There was one reason and one reason only to carry the metastructural progression to 13... and that is if, on some level, there was reason to believe that something revolutionary and/or evolutionary was taking place, or about to take place, or had taken place in the collective human psyche.

But, I had no real reason to believe this at the time.

However, it's been slowly (and, uncomfortably) occurring to me, for a number of years now, that the technological age has pushed the envelope further than anyone had anticipated. Really. It is now the year 2013... but, seemingly, in more ways than one, the number 13 - albeit metaphysically and subliminally - is upon us.

Incidentally, I've posted 2 of my earlier (1985) drawings of the Unit 2 process and dynamic figures for #12 directly above. These were drawn with colored pencils on index cards for my first working deck. From my notes written at the time, the process figure (to your left) symbolized: "The restructuring of behavior patterns initiated in #11. A vacation. Movement away from a situation. Losing interest in what has been established. The threshold of a change. Set emotional patterns have become "things"; projections and mirrors."

The dynamic figure (to your right) indicated: "Revolution; the turning of events. In emotional matters: the full heart. Victory and the establishment of a new order."

Adding a #13 set of cards to the deck represents something of an impasse. But, I'll leave it to those of you of metaphysical persuasion to work it out for yourselves. Meanwhile, interesting theories about #13 can be found here, here, and here. On the other hand, freaky ones can be found here. 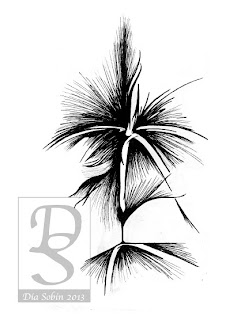 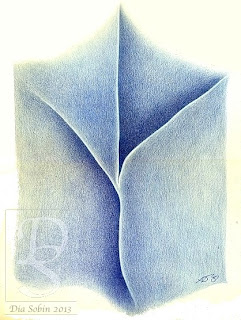 Footnote: I added these 2 drawings today in response to a comment... but, you'll have to read the comment section to find out just why!

Meanwhile, here's a short description: the drawing on your left was from 1973... one of a series of "automatic" attempts at describing "reality". This one, possibly, represented its multidimensional aspect.

Eight or so years later, I drew the blue metastructural symbol to your right. You'll recognize it as Unit 3.  Basically, the two drawings describe a similar concept. Keep in mind that the blue drawing was not merely a symbol, but, also a diagram... as, essentially all 4 symbols of the series are.

BTW, I was always aware that Unit 3 was similar to the Greek letter psi, but I Googled it now, just for the hell of it... and, the Wiki entry was quite an eye-opener. (See here, also!)


Some time ago I had a short post - A Musical Interlude - featuring Klaus Schulze's "Kontinuum" (2007). Schulze's earlier synth orchestrations were very key to my artistic output in the days from which most of my metastrcuctural work emerged. Sadly, the copyright trolls have been short-circuiting many YouTube offerings, and this was one, forcing me to delete the post.

I am restoring a Kontinuum link, however... that is, until the next purge!

New comments are not allowed.