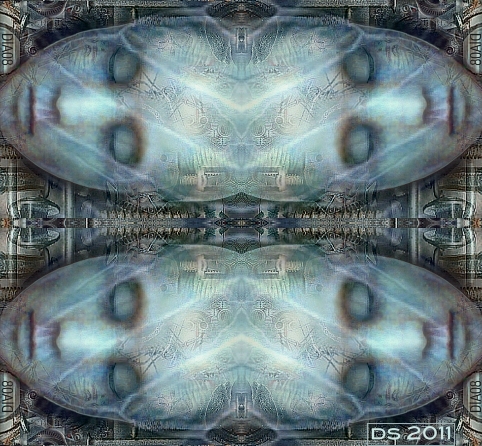 I think the thing I sometimes forget most about "virtual reality" is that it is not reality; it is not even a reflection of reality. It is, at the most, a counterfeit reality, in that it presents us with a view of life, but, intrinsically, it has no life. There is no true life force running through the blips and bytes of the world wide web. Your monitor may light up like a candy store but if you reach your hand in there's nothing there. It may as well be an hallucination. You can't even be sure that those false images that fly before your eyes are the same false images others might be seeing; perception, after all, is a relative, subjective collection of sensations. And, computer monitors are a dime a dozen.


Of course, the same may be said of the "official" reality in which you exist... you can see things and touch things, but beyond that, every now and then it might occur to you that you are, for the most part, living in your head. Meanwhile, communication with other entities is almost an unspoken, subliminal "gentlemen's agreement": let's pretend that what we see has meaning... let's pretend that what we see exists. We're, of course, not seeing the exact same thing, but we can assume our differing viewpoints are similar enough, and we can imagine we're sensing and experiencing similar things. There are, after all, other life forces and senses that come into play within a true life experience.


In virtual reality this is not the case. Along with the falseness of the reality presented, everything false follows in its wake... a false sense of identity, a false sense of camaraderie, a false sense of communication... while, in ones actual reality  - "meatspace", that is - very little is happening. Synapses may click and codes may coalesce, but the vitality, passion, desire and communion - that is, the immeasurable phenomena, or noumena, which truly make us human - is never engaged and will never come across. One might be fooled into thinking otherwise, but this is ultimately a spurious experience. Nothing has happened. One has not grown. Nothing has essentially changed. One may as well sit down and do a crossword puzzle.


Virtual reality then, is nothing more than a shallow mental exercise... a false construct, a false life, a video game. What you see is not what you actually get.


Every now and then, however, a light peeks around the perimeter and one has a moment of clarity and disillusionment; and this moment, I guess, is mine. It will mean nothing to you. Your day will not change, nor will mine. You will not know me any better... I will not know you at all. Several minutes from now, I may change my mind. But it will not matter, and "matter" will not come into play.


It's like this, and hear me out. "Spontaneousness" and the internet - specifically in the form of social networking (and while blogging might fit into this category, emails would not) - make disastrous bedfellows, specifically for the creative person. All varieties of monsters may be spawned and the minute they've been spawned on the web, they often cannot be retracted. Not only that, but, let's say you innocently leave a comment on a blog somewhere - worse still, you make a habit of using your real name - well, presto (!), not only are your words carved in cyber-stone on many programs and blogs, but search engines (such as Google) ensure that they can be read world-wide for eternity. I'm not even going to address all the cyber-piranha that might be interested in such innocuous information - in a cumulative sense - for the purposes of profiling.


The real problem arises, however, and this is why this particular post was moved here, is that many artists, writers, musicians, etc. who use a digital medium for their work - and specifically the same computer to both create and access the internet, are not merely leaving their work exposed to predators, but are possibly endangering their psyches as well.


The fact of the matter is, a creative state is an "altered state". The "you" that is operating in an elevated, muse-orientated mist is not the you who should be social networking 10 minutes later. You are still too vulnerable at this time. The spontaneity that you've brought to your work is not going to translate on the WWW. It will not be well-recieved. Essentially, It will not be "received" at all because your audience, those whom you are attempting to communicate with, are simply not operating on the same level as you are. You may as well be "speaking in tongues". Freshly out of creative work, you're virtually naked and in every sense as vulnerable... In other words you have no business being online. Wait for several hours - until your creative high has dissipated - before you go online and visit your favorite haunts. But, even then, keep this in mind:


The internet's real purpose is to distribute information, sell products, and to entertain. All social interaction is generally of the most superficial kind. Do not go online anticipating high communion... the WWW is certainly not the place to bare your soul, and neither is it a place to safely speak your mind.


Be forewarned. In many ways, the web is outright bullshit, and in time it will only get worse.

For your listening pleasure:


(My special thanks to Greg at The Daily Grail for this inspired video link...)

Greetings to whoever is presently reading this post. Well, someone has... and quite recently, too. So, I decided to reread it myself. (Thanks, mysterious human, for bringing this to my attention.)

I think the first and original section of the post - in yellow - is probably where I should have left off. The second part  - the later addition in white - sounds a tad peculiar to me now. I must've been having a really bad day... or felt violated in some way.

Do I still feel as paranoid about the web? Not exactly... I think what bothers me most about the web these days is the rampant capitalistic commercialism... but I'm not even going to go there. My biggest actual fear as a blogger is the fear of being misunderstood... mistranslated, or effectively censored by my lack of commercialization. In any case, things are hardly "indelible" on the web. They vanish all the time. And who cares?

However, if the copy (above) in white should suddenly vanish, well, it isn't magic; its housecleaning.

Okay, well, maybe it is magic in a sense. I'm kind of manipulating the past from the future. Which is cool.

But, you know, I'm not even sure I agree with the first half of this post anymore. In the end, I think i Just like the graphic - that is, the graphic still strikes me as true - in that, what we actively seek on the web - though seldom get - is a mind-meld.  I also like the comment section... I love positive feedback. Well, okay, I love any feedback... so, thanks LC and BG from the present future past! Whatever.

So, as it now stands: I may erase this entire post except for the graphic, this addendum, and the comments. I'm not even sure the video is still present... on my browser its a black hole. Anyway, call it Art... the Art of Creating Missing Information. Very existential, no? ;-)