The Starman & The Swan People: A Dream 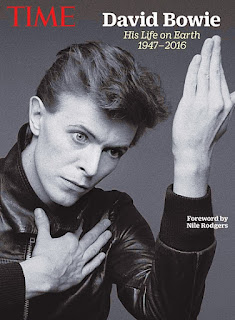 "I've been dreaming of David Bowie for the past few nights; they're the first dreams I've had of him since his death in January. Unfortunately, they were so vague and elusive I can hardly remember them. The only one which actually stuck is the one I woke up from early this morning, and DB wasn't even present in it. It was a short dream and different from the others in that it had this peculiar realistic quality about it similar to a lucid dream. At the same time, I felt like a sleep-walker throughout the dream; one who has suddenly woken up in a very strange place with no rational reason for being there.

In the beginning, I seemed to be milling about with a number of people in what resembled an airport type of structure. We had all gathered there for a common purpose, although - initially - I had no idea what the purpose was. At some point, we arrived outside of a glass-enclosed room which might've possibly been some variety of control center... or maybe a television news production studio... with rows of seated people gazing at glowing monitors in the semi-darkness. Suddenly, an announcement was made, and I immediately realized that this was the information that I and the others had been waiting for. Although I don't remember any physically audible broadcast, the news was somehow conveyed to all present... and it went something like this:

"It is now official. We have just learned that David Bowie has left with the Swan People."

And, that was it: the end. I woke up with the words "swan people" reverberating in my head and it seemed imperative that I remember those words."

It's been well over a year and a half since the Starman left us, and almost as long since I had the Swan People dream (above), so, it probably seems strange to be posting about it now. I intended to post about it last year - as evidenced by my original Music Box series menu - but, after my last Music Box post in May of 2016, the series was stalled by a number of real-time misfortunes, and, as for the "alchemy of love," well, cats and kitties, I just wasn't feelin' it.

But then, in February of this year - almost a year to the day of the Swan People dream - I dreamt about DB again. The Swan People were not in evidence, but, this time the Starman was. And, he said something in the dream that's stuck with me for months - which I'll reveal later on in the post* - but, it wasn't until I throughly researched swans (and Swan People) that I found a link between the two dreams... and some renewed inspiration!

So, in part, this post is about the mysteries of dream symbolism - specifically the swan symbol - but, it's also a tribute to the mysterious Starman himself; a tribute long overdue.


* I (optimistically) assumed I'd be able to finish this post in one part. The second dream will now appear in Part II... Part III.

In Search of the Swan People 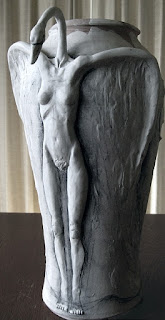 "As swan people, these dreamers must have been able to envision the bands as groups of swans flying together along a trail of the seasons. From my knowledge of this and the other empowering stories of Dunne-za medicines, the swan people seem to be the only ones given the vision required to direct the communal hunt. If any of the medicines are to empower the communal hunt, it must be that of Swan. People with "swan power" could look ahead and see events beginning to materialize beyond the imagination of others. They saw in the events of one season omens of seasons to come."

” Naachin or “Dreamers,” according to Ridington, “are people who have experienced the Trail to Heaven in person. They have known the experience of dying and going to heaven. Unlike ordinary people, who die once and do not return to the same body, Dreamers leave their bodies, grab hold of a song that carries them forward, and then return to earth on the trail of that same song.”

- Another reference to the Dane-zaa from The Dane-Zaa Indians and the Vision Quest (.pdf) by David Martinez.

"The vision has this power over individuals and communities because they believe in the relevance of dreams. Unlike the western intellectual tradition that often feels like it knows more the more it debunks or demystifies things, Indigenous cultures are certain that they have a more profound appreciation for the world by presupposing that the world is ultimately mysterious, in the sense of being sacred and thereby beyond the realm of philosophic reason. Yet, dreams are a source of knowledge. More specifically, they constitute an existential encounter with an alternate mode of awareness.This awareness for the developed dreamer enables him to experience the transformation of his lived world into something mythic and superordinate... 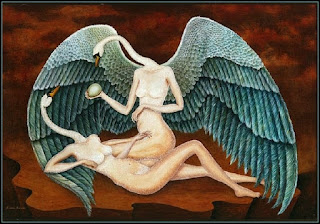 ...Because of the fundamental nature of the visionary experience, one cannot satisfactorily interpret dreams because they contain both the known and the mysterious. The visionary landscape and the lived landscape are enfolded into one another... To enter the dream world means, in this sense, to alter consciousness and enter into an implicit dreaming order—the unfolded, psychic potential of the visionary realm— that has a structural, morphological effect on consciousness.”

- Excerpted from Stories of the Vision Quest Among Dunne-za Women, 1983, Robin Ridington. The wonderful image (inset left) is one of two featured in this post by alchemical artist Karena Karras. The other can be found in the Alchemical Swan section (Part II).

"Did you know that the beautiful Swan is one of the Native American Totems? Sister Swan gives a message of Grace.  She teaches us to surrender to the grace of the rhythm of the universe and to slip away from our physical bodies to enter the Dreamtime. Swan people have the ability to see the future as they surrender to the power of Great Spirit. They are accepting of the healing and transformation of their lives when that surrender takes place."

- From this Native American Totem page. 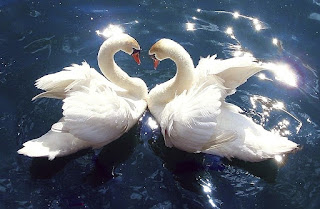 As you may have suspected, I take dreaming very seriously, but - and, as I've probably said in the past - dreams are tricksy things. The most we can say for sure about them is that they emerge from the unconscious mind and often utilize a language based on symbols. Sometimes they seem informed by recent conscious experiences. For instance, as it was, immediately previous to the Swan People dream, I had just finished (digitally) creating the Music Box panels, the lid of which (above) - although it consciously escaped me at the time - very much resembles a pair of swans making a heart-shape with their necks, as they often do in reality (inset right).

Then again, the dream was in reference to our (beloved) Starman. As It was, it was his unexpected loss to a large degree that propelled me to begin composing my Music Box series to begin with. And, predictably, not long after his fateful day, journalists often referred to his last album, Blackstar, as his "swan song." So, either occurrence may have filtered into my brain triggering the dream. But, somehow, I never really thought so, and now - after further research and a second dream - I suspect something else might have been at work...