A Belated Happy New Year... And Another Dragon 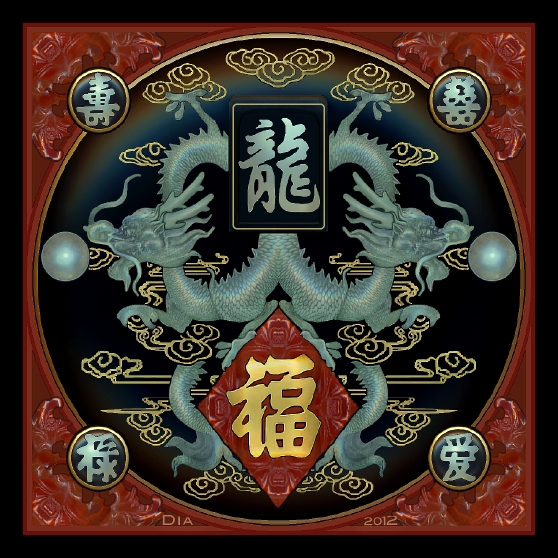 Well, I missed my deadline... and the "jade" still needs some work, but I decided I'd better post version #3 before I totally went around the bend. It is seemingly not the most auspicious time for artwork!

In any case, may the Water Dragon bestow it's blessings upon all of us! 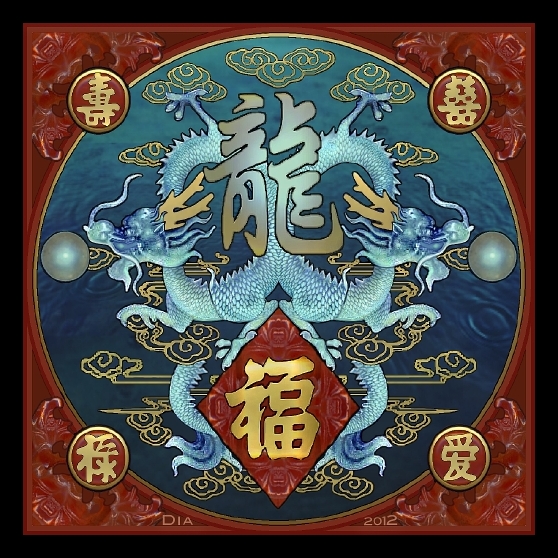 It’s also true, however, that all five of the Chinese Dragon years — Wood, Fire, Earth, Metal and Water — tend to magnify both success and failure. So while they can mark huge achievement, disasters can be equally immense. The Year of the Fire Dragon (1917, 1976, and 2036) typically wreaks the most havoc.

However, the Year of the Water Dragon (1992, 1952 and 2012) is noted for its calm, visionary intelligence, and balance of right brain creativity with left brain logic.

What influence might the Water Dragon, which rules from January 23, 2012 to February 9, 2013, have on the powerful energies already anticipated at that time?

Like all Dragons, the Water Dragon is an innovative, fearless leader. But the Water Dragon is also far more sensitive to others’ needs, and is more likely to be progressive and diplomatic, as well as socially and environmentally conscious. Because Water bestows a more peaceful disposition, this Dragon will act wisely and intelligently, and unlike his fellow Dragons, is willing to set aside his ego for the good of all." 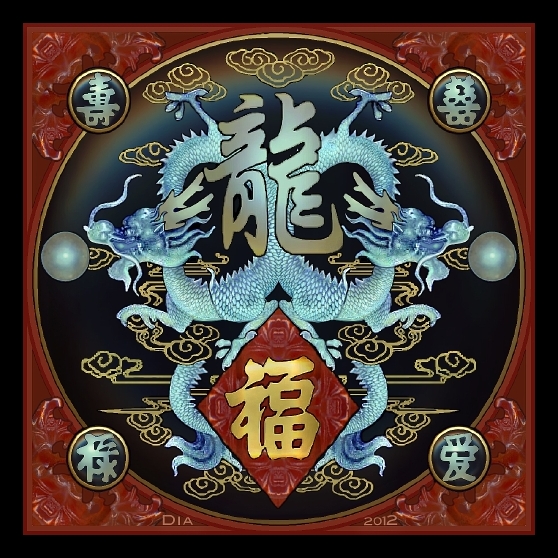 The 2011 holiday season is now behind us and 2011 is now history, and I imagine that very few of us are particularly sorry to see the back of it. But, as it stands, the end of the year and the western New Year celebrations have always left me a little cold - okay, a lot cold - quite possibly because my birthday happens to fall on December 31. Yeah, you'd think I'd be out there partying like mad and having a grand old time, and I confess, in my twenties and thirties I really did try. But I failed. Now, I just find the whole enterprise, all the New Year's hype and forced sentimentality, abysmally depressing. As in, yuck.

And, no, I don't dig having to add a higher digit to my age, either.

Then, of course - and lest we forget -  one can't escape all the gloom and doom via   soothsayers who will insist that the world's about to fall down the crapper in 2012. Well, it's always something. This time it's due to misinterpretations of the Mayan "Long Count" calendar. As it happens, according to this particular calendar, 2012 does mark the end of a Mayan cycle. It does not, however, indicate that there aren't any further cycles to transpire.

Interestingly, others have marked this period as the "return" of Quetzalcoatl, the Meso-American "feathered-serpent" god, which, if you think about it, could very well be representational of a dragon.

Anyway, when I realized that the Chinese Lunar Year of the Dragon is due to begin the 23rd of January - the day of the new moon - I put on my proverbial dancing shoes again. THE YEAR OF THE DRAGON - how cool is that? And it falls on a date with a fairly auspicious number - 23. It's so nice to have another day to start the year again!

Contrary to western tradition, the dragons of the east are magnificent creatures and not evil at all. Interestingly, the Chinese people believe that they've descended from dragons, which is of particular interest to me, in light of my own dragon Princess. (And, speaking of reptilians...)

That being said, the minute I realized that this is a Dragon year, I felt inspired to create my own lucky talisman image, hence the 2 images - variations on the same theme - above. I incorporated all traditional Eastern elements in my design, including the red lozenge-shaped emblem with the gold symbol of good fortune, the large dragon character, and four additional Chinese characters for longevity, happiness, prosperity and love. I used actual jewel scans to create the images, notably carnelian, pearl, obsidian and gold. I'm working on one with jade also, and if it works out, I'll add it to the post.

(UPDATE: The jade dragon can be found here.)

Meanwhile, feel free to "borrow" a talisman for your own personal use - non-commercial only, or it won't be so lucky... well, that is unless this "starving artist" gets a piece of the pie!  :-) -  and, most importantly,  have a most fortunate year!