It is now officially Autumn; that spooky time of year which (normally) precedes winter. Unfortunately, this year, the same description is inadequate; our entire year has been spooky regardless of the season. Moreover, here in the States, we seem to be recklessly segueing from one circle of Hell to the next like loose cars on a roller coaster. The Pandemic, of course, continues to take its toll (one way or another), but, over the summer - that is, if you can call it a summer -  a virulent outbreak of Racism amassed its own casualties. This nightmare, in turn, lost its headline-news status when a blazing inferno began taking out large portions of the Pacific coast. Even here in New Mexico the skies continued to be a bit grey with the fallout for over a week. (Scarier than that, my friends on the east coast - 3000 miles away - report that the smoke was in eastern skies as well. One wonders how far and fast other pollutants can be transported.)

Ah, but there's a new circus in town. Yes, it's getting perilously close to Election Day again and although, in a visual sense, it seems our Presidential choices are not all that diverse - i.e., for the most part: old, male and pale - Democratic hopeful, Joe Biden, proving that he's no slouch, chose a vivacious female running mate - both African-American and Native American *- and, in terms of entertainment value, she's just about everything he's not. And that's the good news. The bad news is that, unfortunately, many Americans (both male and female) are firmly misogynistic; a fact not lost to Biden's foes whose agenda is to keep misogyny thriving. Therefore, the cunning Man from Mordor (who cannot be named) - and his creepy, bleached-out sidekick, (whose name can't be recalled) - continue to hold a large segment of the Kingdom of the West in thrall, and, while this phenomenon has never been sufficiently explained we might assume either the Dark Arts are involved or, perhaps, the many toxins now present in water supplies.**  Regardless, the present administration continues to produce damage and will do so, apparently, till the "fat lady sings"***; assuring American citizens that regardless of future election results, we'll be wading in muck for years to come.

However, after one very long year of Deep Muck, I think we might all agree that, while it's been advised to make lemonade when presented with lemons, it is equally advisable that, when in hell, make popcorn. Seriously; the conditions are optimal (and give new credence to "Hellzapoppin.") And, what goes better with popcorn than a movie? And, really, what kind of movie pairs better with politics than Walt Disney's 1940 animated film, Fantasia?

This is a wrap. Enjoy the film-clip... and pass the popcorn.

Incidentally, if you're in need of more laughs (and who isn't?) - and can read English - here's some outrageously stupid news headlines.

Sorry for the mistake; apparently even legitimate sources can be inaccurate these days... and I've been ignoring all things (and people) political for several years +. And we know why.
BTW, Kamala's middle name is Devi (how cool it that?) and her birthday is 20th of October. Inset right is an image of the Devi, Lakshmi, as is the one inset left below. Both can be found here. (Click to enlarge.) 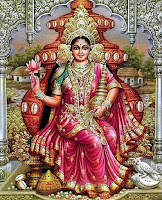 Interestingly, although there are a number of Indian Devi (Goddesses), it was the images of Devi Lakshmi that resonated with me the most. According to Wiki, she is the goddess of wealth, fortune, love, beauty, Māyā, joy and prosperity. She is both the wife and divine energy (shakti) of Vishnu, one of the principal deities of Hinduism and the Supreme Being in the Vaishnava tradition.
She represents the material world of the earthly realm as the mother goddess and "is depicted in Indian art as an elegantly dressed, prosperity-showering golden-coloured woman with an owl as her vehicle, signifying the importance of economic activity in maintenance of life, her ability to move, work and prevail in confusing darkness. She typically stands or sits like a yogin on a lotus pedestal, while holding a lotus in her hand, symbolizing fortune, self-knowledge, and spiritual liberation. Her iconography shows her with four hands, which represent the four aspects of human life important to Hindu culture: dharma, kāma, artha, and moksha."
**  Oh, and you thought I was kidding, eh? Read this from the BBC: Brain-eating microbe: US city warned over water supply.