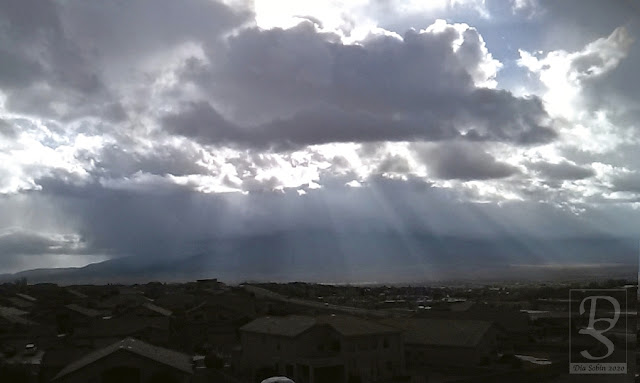 (Between the large cloud (in the image above) and the rooftops of human dwellings in the foreground is an unusual, undulating veil of mist striated with the sun's rays. Beneath the veil - stretched out from left to right and lying in shadow - is Sandia Crest, the main body of the Sandia Mountains. This is a cell-phone photograph shot in late March of 2018 while I was still living on the road. It is amongst my last photos of the Sandia Mountains. The rest will appear further on in the post: formally the last post of the Traveler & the Mountain series. (Part 1 & Part 2). Click on all images for larger view.)

"The sense of the sacred does not require any image of the gods. There will be no more gothic cathedrals built to exalt humankind to the heavens; no more prophets to lead humankind to the divine; and no more Holy Grails to entice humankind upon the Quest – we now have the sacred suffusing us en masse, manifesting as both the tangible and intangible. Our cultures are being finely renewed from the inside-out by a subtle vibration that has come to us through a myriad of emanations in different forms.

Our ancestors were aware that they lived in a sacred cosmos, where the physical world existed in communion with the unseen dimension which ensouled and sanctified it. There was no rigid line drawn between what was the inner world and what was external reality, because both domains were in correspondence. The individual human soul was a part of the greater sacred reality. And just as the sacred is an instrument of the human, so the human is an instrument of the sacred. The sacred worldview is one that accepts not only the metaphysical but also the magical and the mysterious – the magnificent wonder in everything and all. As the Greek Orphic Mysteries of 2,500 years ago spoke: ‘I am a child of earth and starry heaven, but my race is of heaven alone.’"

"There is, we feel, something different about a sacred mountain which cannot be easily explained, something that makes it exceptional. It possesses a kind of energy that’s unique to itself, which can be sensed and felt as much as seen. It draws people to it…inexplicably, mysteriously: 'The power of such a mountain,' writes Lama Anagarki Govinda,
'is so great and yet so subtle that without compulsion pilgrims are drawn to the mountain from near and far, as if by the force of some invisible magnet, and they will undergo untold hardships and privations in their inexplicable urge to approach and to worship the sacred spot. Nobody has conferred the title of sacredness upon such a mountain; by virtue of its own magnetic and psychic emanations the mountain is intuitively recognized to be sacred. It needs no organizer of its worship; innately, each of its devotees feels the urge to pay it reverence.'" 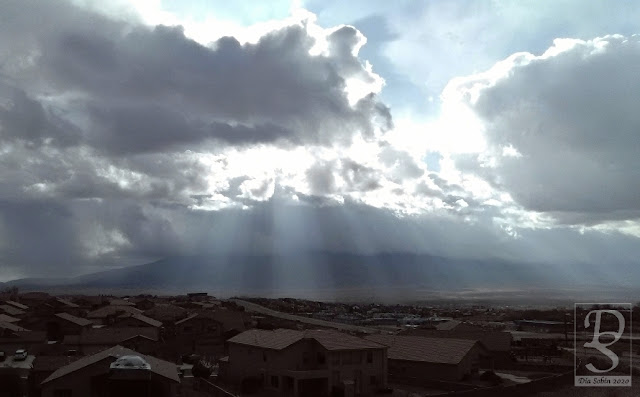 The mountain lies in its own protected dimension.

It asks nothing from the world of women and men...
except, perhaps, their acknowledgement... and wonder.

It does not ask for reverence... and, yet, it is revered by all those who witness it. It has little contact with humanity... and, yet, its presence orders human lives.

For instance, the mountain orders the weather.

It orders birds... and birds are made. 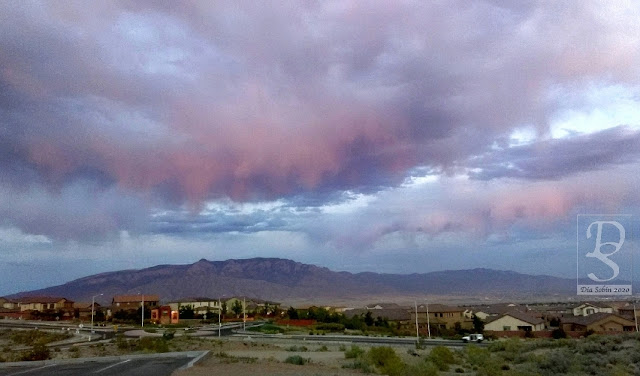 Although the mountain does not order the sun, it sometimes orders the clouds to appear in the setting sun's nightly stage production... a very colorful event!

But, in the end, the Sandias serve a larger, mythological purpose...

The Lost Mountain* was that which had the ability to draw the sky down... with its mists and its clouds... till the mountain was obscured...

... and hidden entirely from human sight.

Of the mountain's invisible exploits during these times, we can only speculate.

* While I have heard of a Celtic Lost Mountain legend (terrestrial location unknown), I'm not certain of the existence of other Lost Mountains although I think it's safe to assume others exist. There is, for instance, an actual "Lost Mountain" in the Pyrenees, on the border of France and Spain: Monte Perdido in Spanish or Mont Perdu in French (both meaning "lost mountain"), a World Heritage site since 1997.