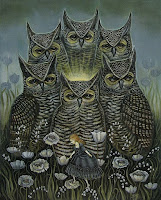 Well, it's the witching season again and, in an effort to stay true to the spirit(s) of our various Days of the Dead, I thought I might feature a new artist whose work is unique, pleasantly spooky, darkly ethereal and the stuff of Old World dreams: the illustrations of Kansas City, Missouri artist, Kelly Louise Judd. (Inset right: Light of the Owls, 2012.)

"Swan Bones Theater" is the name she uses to describe the "fragile shadowland" from which her images emerge as well as the illustrations themselves. Which is perfect really - especially for today - because, if you've recall from the Swan People posts, the swan is the symbol of the psychopomp in many traditions. To repost a quote (found here): 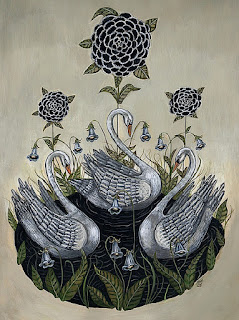 "In the British Isles, Samhain is the time when we see the migratory swans returning for their winter break. Their arrival at their winter waters is far from shy. In full voice, the awesome, evocative sound of hundreds of powerful wings beating signals their presence. They have been guided by the stars of Cygnus, the swan constellation, the Northern Cross, that guards the gateway rift in the Milky Way. They represent the winged soul returning.

The swan is the psychopomp. She flies with the souls of the dead from the burial grounds, the charnel grounds, and the necropolis. She takes them, under the guidance of the Cailleach, to the realms of the spirits."

- Caroline Wise from The Swan, the Goddess, and Other Samhain Musings.

Inset left above is Three Swans (2015). All images in this post - including the one below - can be found on Judd's website.


Blessed Be and have a (transdimensionally) magical day!

- First stanza of the love song, (Don't Fear) the Reaper, written by Donald Roeser
in 1976 and performed by the band, Blue Oyster Cult. (Lyrics) (Video)